I am very busy these days with various work to get done, so I haven’t been able to post nearly as much as I want to. Today I’d like to share some random pictures taken by me or my loadmasters the last two weeks. My first day was spent doing an audit, so not much pictureworthy about that. The rest was much better though.

I really love flying the B2. Though not as powerful as the B3, it is a very smooth ride. And as far as internal load goes, it is sometimes better than the B3, seeing as some of them have a higher dry operating weight. This bird has more than 12 000hrs.

Later in the week I was given a B3 in order to carry out some heavier lifts and improve my range between refuelling. The most notable difference in the cockpit compared to the B2 is the inclusion of the VEMD screens. New B2s will have this as well, but none of ours do.

END_OF_DOCUMENT_TOKEN_TO_BE_REPLACED

In this picture you can see vehicle information on the VEMD. To learn more about the VEMD and the capablities it holds, download the app by Airbus Helicopters for iPad here. Don’t forget the neat feature to do performance calculations. A good pointer to see if you’ll be able to perform as required.

Here are two teaser clips of the X4 about a month off from being unveiled at HeliExpo. Being a big fan of the Dauphin family of helicopters I am very excited to see what is to come. What we know so far is that it will feature the exotic Blue Edge blades, a feature that will reduce noise generated by Blade-Vortex Interaction. Read more about the developement at Aviation Week

The other day I was asked by the Italian helicopter news website HeliPress to do an interview. My ego couldn’t resist of course, so for those of you who are interested in reading the interview you can find it here: Interview

For those of you that care about such silly things, I thought I’d walk you through my day today. If you are a pilot this isn’t going to be interesting at all, so go surf on YouTube or something.

Saturday and we only had one flight scheduled. The job was picking up personnel that would do maintenance at a telecom site. Pax with internal cargo only. Needless to say they wanted us to be airborne by first light, so we didn’t exactly get to sleep in, not that I am able to anyway.That being said first light today was about 0820 am, so not exactly an early start to begin with.

I usually start off by getting my kit ready in the helicopter and browse through the aircraft documentation so that all that remains is a preflight and adding some fuel. This time of year I pack a lot of cold weather gear in case we get stranded somewhere inhospitable. The documentation was fine and no changes to the configuration of the aircraft was required. Typical changes to configuration are the cargo baskets and whether or not the dual-controls should be installed.

Pre-flight planning was next on my list. Checking Notams and weather I quickly realized that the weather could be factor for today’s flight, and snow in particular. Visibility-wise we need at least 800m, which is really quite bad and also impose a speed restriction of 60 kts, meaning we wouldn’t be getting where we were going very fast. The forecast was for visibility down to 300m, which isn’t unusual in showers of snow. My only hope now was that the showers were few and far apart.

Departure was delayed in order for us to check some webcams enroute when the light was sufficient to make out anything on the cameras. Trip distance was only about 32nm if we’d be able to cross a mountain pass, 50nm if we had to go the long way. In the picture on the right you’ll see a screen capture the map service we use to get obstacle information. This information is also available to us on our iPads, along with our company database that we also share with our competitors. When we are flying our loadmaster use paper maps as our primary means of navigation, but the iPads and GPS’ add good situational awareness for us pilots as well as an added redundancy. END_OF_DOCUMENT_TOKEN_TO_BE_REPLACED 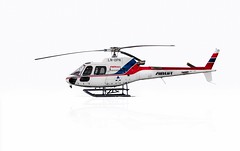 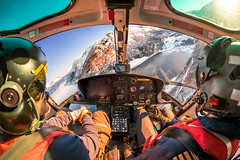 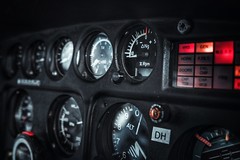