I’m frequently asked about how I’m able to capture some of my pictures when I’m flying. In this post I’ll try to explain how, and the considerations I take to do so safely. First of all I want to make it clear that one should always follow company procedures and policies and any regulation that may apply. However if no such guidelines are in place in your company, or you are flying recreationally,  these are some basic principles that I adhere to. I’ll admit when I started out in this game I wasn’t as disciplined as I am now, but that is also why I have denied requests from various helicopter media sources to have pictures published that are not in line with what I stand for now.

It’s all about assessing risk. The camera in this case can be considered a hazard. The ensuing safety events can be numerous, a distraction leading to CFIT/LOC-I/MAC, losing the camera (when put outside aircraft, either through suction mounts or selfie-sticks) and causing damage to the aircraft or people on the ground, the camera hitting occupants in an emergency, camera setup preventing evacuation following an emergency, and the list goes on until your imagination feels it has covered all the ways Murphy could interfere. Knowing these risks, you can add safety barriers to see if the risk is reduced to an acceptable level. And as long as capturing pictures isn’t mission critical, the residual risk should be very low indeed.

I’ll be using the term “Pilot Flying (PF)” to indicate the pilot who is at the controls and actually handling the aircraft. We do single-pilot ops, but in some cases I’ll be in the aircraft with another qualified pilot who may then be the PF.

So how do I capture content when I am the PF? There are basically two ways I’m doing this. One is with a GoPro, either attached to my helmet or somewhere else where it is secure in the cockpit, the second is using my Sony A7II, securely fastened as well. Common for both setups is that they will be on time-lapse mode, so that I will not need to interact with the cameras at all when I am flying. This way I can focus on flying, and the camera is doing its thing in the background. This is one of the most important safety considerations you do, as you want to make sure you are always vigilant in your flying duties. This is especially important in a congested airspace or during low-level ops.

Secondly you want to make sure that your camera is mounted securely. Make sure there is no way the camera can interfere with anything that prevents safe operation of the aircraft or block exits. I always attach it in a manner so that the camera will not come loose even in a hard landing scenario where that could cause further injuries to occupants. I usually achieve this with several straps and ratchet straps to tie-down tripod and camera. Imagine the forces it would be subject to and go from there. Even though I feel very confident in my setups, as a general rule I always keep the camera some distance away from flight controls and critical components like fuel shut-off levers.

I don’t do selfies or otherwise operate the camera handheld as PF. I never put anything on the outside of the aircraft as per our current company policy and because I don’t feel the risks can be mitigated sufficiently . Since I’m sometimes privileged to be flying with a qualified pilot beside me I may be able to do some handheld shots from time to time. This depends on various things, like if the workload requires me to assist the PF, weather, navigation and so on. One thing to consider here is the camera strap. Some of our aircraft have fuel shut-off levers on the floor between the front seats. It would have been a bad day if the camera strap caught that and shut down the engine. To prevent this and also to reduce the risk of dropping the camera (I still don’t put it out the window) I roll the strap around my arm a few times.

The last thing I want to mention is content and context. As much as possible I try to make sure my pictures don’t encourage other pilots to do anything reckless in order to replicate my pictures. Sometimes certain missions require low flying or steep turns. However the context isn’t always so easily conveyed. A picture of a steep turn does not tell the story of the considerations made before executing that maneuver. So as much as possible I try to refrain from posting such images, at least not without proper context. The modern helicopter pilot should seek to get his adrenaline kicks elsewhere, away from the cockpit. That doesn’t mean there isn’t a lot of fun to be had within the aircraft and company limitations though, but you might find the reward in accomplishing a perfect load delivery to the top of a tall cellphone tower instead of doing a low-pass over your buddy’s house.

So bottom line, fly the aircraft first, and take pictures only when it is safe to do so. 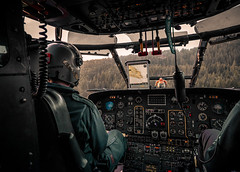 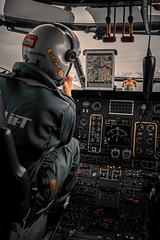 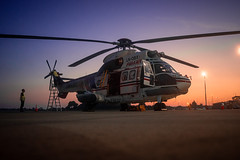